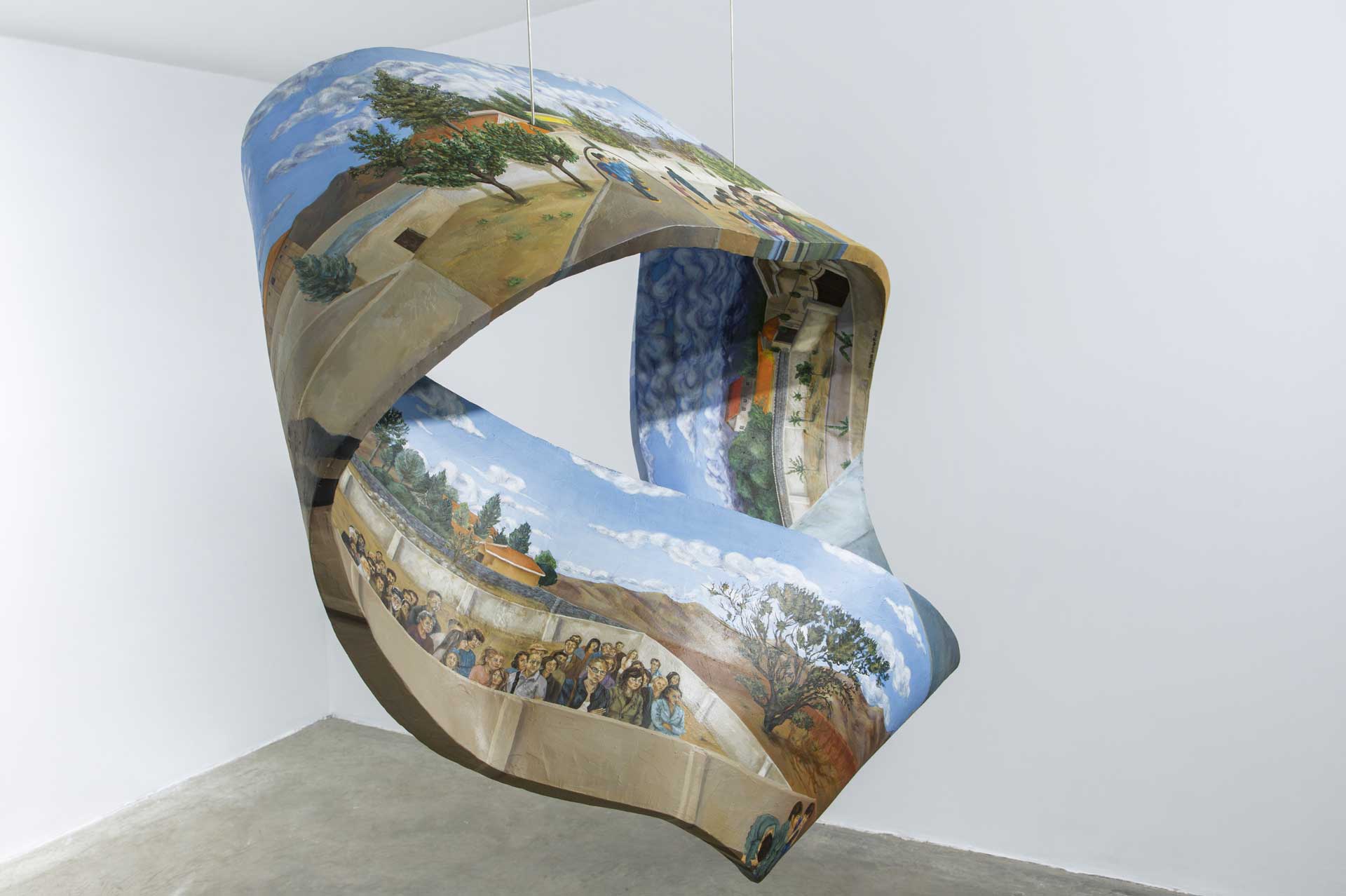 * Installation Views
* Individual Works
* Statement
In this series, the narrative in the paintings is entangled with time and space. Referring to the narrative paintings throughout art history, I seek to challenge the narrative role in my works. Here, by bringing the paintings out of the canvas and expanding them into space, the logic of linear narrative collapses. Just as the narrative sequence gets disturbed in the stream of consciousness, the temporal and spatial logic is lost in my paintings. In the space created for the audience, I try to encourage them to wander around the works—an invitation to a playful and incomplete reading through an exploration that requires repeated effort. It is impossible to reach a correct reading of the narrative here because the narration has been inadequate from the beginning.
Inadequate Narration
In this work, mathematics and geometry, and Maryam Mirzakhani's theory of counting simple geodesic on hyperbolic surfaces, which has inspired the development of this form, have been used to challenge the nature of the narrative image- to make a straight line, make its way around a circle and pass through two holes in the shortest time. In this work, the line gives way to the narrative, which proceeds its way in a long linear continuum and returns to the starting point in the shortest time. The narration will not be readable despite the linear continuity due to the disruption and space/time intervals. In the end, despite the visual continuity, the narrative has no beginning or end. Looking at an event from different angles can disrupt the grand narrative, so there is no straightforward story.
Infinite Action
This painting is based on the Mobius strip. The Mobius strip can invert the relationship between inside and outside, wherein a continuous transformation changes the nature of the space. Here, the space has a twofold but persistent quality, so a third space comes to life as a result of combination of outside and inside. This third space is where synchronization, transformation, and repetition between phenomena take place.
Lady Of The Rocks!
The Virgin of the Rocks is the title of two works by Da Vinci that subtle and secret changes in them make different expressions. Pearls and oysters, which are two symbolic elements, meant that Mary's fertility is as miraculous as pearls' formation. At the time, it was believed that pearls were made from very pure dewdrops and in an extraordinary process. The palm tree is an alternative symbol for pearl-making scallops, and its combination with a mountain cave has been a religiously precarious act. At the time, there was a claim that the scallops in the mountains were evidence that the church's teachings about the creation of the earth were untrue, and it was considered apostasy, so Da Vinci putting such signs in his paintings made him in danger of being accused of apostasy.
Treasure!
The narration has three hidden meanings: understanding, describing, judging. The girl says: "there is something in here we cannot find." The narrator describes. Telling is a way of knowing. But children cannot use language to express what is in their minds adequately. The three children are constantly describing what they are doing. They hang on to their definition of the treasure, and by making stories about it, try to make the time more bearable.
“And if I ever stop talking it will be because there is nothing more to be said, even though all has not been said, even though nothing has been said.”
― Samuel Beckett, Malone Dies
* Press Release
Niloufar Fallahfar (b. 1991, Karaj, Iran) has a bachelor's degree in painting from Sooreh University in Tehran. She has created works by focusing on representing invisible aspects of painting and connecting the medium with spatial dimensions. In her works, she mainly aims to expand the painting's framed surface and transform the medium's characteristics. By attaching and adding forms to painting, she has used the possibilities and capacities of formal expression to take a step further from the language of painting. The artist looks critically at the nature of the painting as a medium and examines how it can act vague and inaccurate in narrating. In "Inadequate Narrative," the artist invites the audience to have an incomplete reading of her works. To explore the works, the viewer must look at them from different angles. However, it is not possible to reach a specific reading. In an attempt to make sense of the works, the audience continually changes the point of view and finally realizes that they cannot make a definite interpretation. In the history of art, there have been many intersections between sculpture and painting. But Fallahfar has not sought to make a connection between these two in her works. Painting as a medium depends on its context and the form it demands. By expanding the concept of this form using mathematics and geometry, she finds a new language for communicating with the audience.
In the Inadequate Narrative exhibition, we see two objects made of papier-mache pulp on which the paintings have been done. By using the stream of consciousness and revealing the hidden aspects of painting, Fallahfar has weaved the narratives together in such a way that time is not linear anymore but simultaneously continuous and discrete. In her new collection, the artist challenges the audience by disrupting the process of looking at art and creating a playful and exploratory atmosphere. Fallahfar's multidimensional paintings break the integrity of two-dimensional painting and connect it with time, place, and space. She has created new forms to help her in her storytelling; forms and meanings try to complement each other. In one of the works entitled "Infinite Action," in which the artist has transformed the relationship between inside and outside, the viewer reciprocally is caught between continuous and inverted images; there is no beginning and no end.
* Past Exhibitions 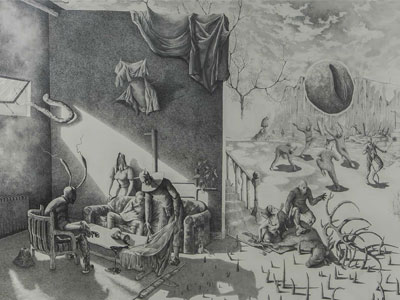 The den of the man with hollow eyes

The pleasure of worthlessness 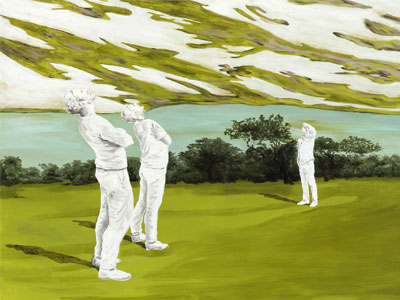 Memories of the ocean swim meets