* Statement
The library shelves are filled with books that in addition to words contain also numbers within and without their pages. Like words numbers can be proofs for establishing a link and construction of an extensive chain of significance in the mind of audience. Each number evokes a memory or an image in mind, but some numbers have been recorded edited. Even if numbers are manifestations of a common past, they will still remain unique according to the lived experiences of their audience, and one cannot assure a common image (meaning) among all the individuals in a society in the course of an event they have lived through. However, apparently it is thought that there a kind of general consensus in a society about specific numbers in history whereas the images formed of numbers can vary according to the status of each individual (in relation to the fact that whether or not the person has been present in a situation, has read it in history books, has heard it from the previous generation or has become acquainted with the historical event through the media). Creating doubt about the lack of uniformity of the meanings which are mostly thought to be as equal is the main purpose of this work and my previous ones Here the audience confronts a cylinder made of numbers, which does not have a readable figure due to the tangled state of the numbers. Then by moving the red filters, he/she will see numbers that were not seen before, because the red filter does not allow the red light to pass through and thus a particular set of numbers appears beyond the erased ones. These are numbers from the modern history of Iran and the world, because besides what has been recorded and edited in history, a link between the audience and numbers is the intention. Apart from the mass memory an individual may have a personal memory of numbers, which poses a challenge to the uniformity of meanings. 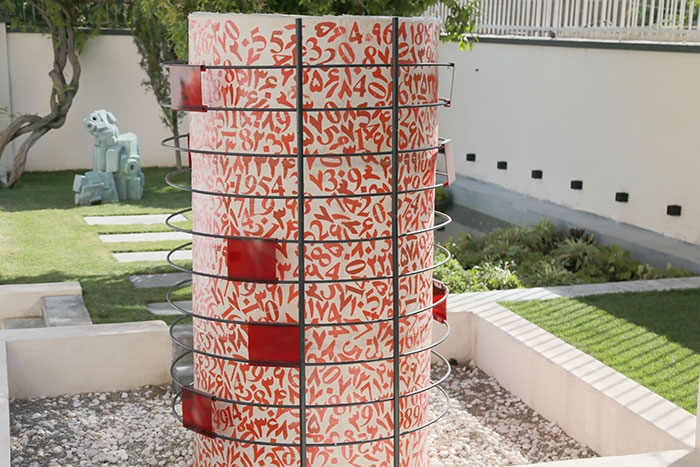