* Installation Views
* Individual Works
* Statement
According to Hannah Arendt, understanding is an endless endeavor in which - despite the versatility and constant changes - we deal with reality. Understanding is somehow, specifically being alive as a human. But we suffer from evil and we need to contemplate to give meaning to life, despite its malevolence and conflicts. And to not let the distance between life and death disappear.
The incomprehensibility of evil means to find the human mind and conscience overtaken with an innate and non-obliterable weakness and defect, and to believe mankind is helpless and desperate in preventing the recurrence of the human incident. To believe in the ineffability of evil is a threat to existence and makes this world unbearable and unlivable for fragile humans and their feeble bones and skins.
Evil is a comprehensible matter and that is why it is preventable. Evil is not a superhuman, diabolical, mythical, or supernatural force. Evil is understandable, therefore we can hinder its recurrence; and because of this, humans are responsible for their actions and their condition.

Then why is it that man still attempts concealment?

Excerpts inspired by Men in Dark Times
by Hannah Arendt

* Press Release
Omid Mehdizadeh creates his body of works using a wide spectrum of artistic media such as photography, sculpture, and installation. He mainly explores public spaces and public affairs with a social approach and the urban landscape has always been a context for displaying his ideas and an inspiration for his chosen subjects.
In the “Blood Laundering” series whose book is premiered at this exhibition the artists uses words in the captions of photographs taken of public spaces devoid of human presence, and objective manifestations of violence within which the traces of the real matter is hidden, to deliver codes to the viewers for discovering and reconstructing these narratives in their mind.
The “concealment” series is comprised of different parts: photographs of trees and mountains, the “Bourg” series which is a series of photographs of construction material, three sculptures, an installation in two pieces that form a dialogue amongst these pieces, and also a series of aerial documentary photographs.
In this series of works, by damaging and distorting images, objects, and concepts, the artist aims to portray the destruction humans force on their habitats. In the aerial photographs, by destroying parts of the documentary image he recreates censorship and presents to the viewer an absence, of which they are all aware.
In Mehdizadeh’s body of work materials always play a key role; printing photographs on aluminum sheets further engages the artist with the creation process. By scratching and detracting the surface of the raw material, the artist causes disturbances in the light reflection process, disturbances which after being printed challenge the audience upon facing and viewing these pictures. Upon viewing the sculptures, the viewer is faced with a resistance against the inevitable and death-like erosion and deterioration of cities.
Mehdizadeh moves toward ruin and destruction and uses various ways of distortion, destructing, and obscuring to alter observation. 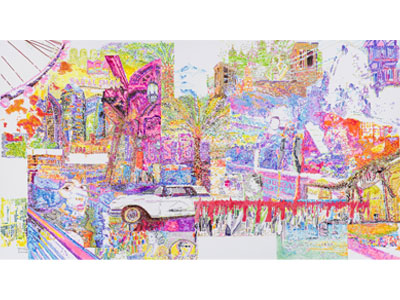 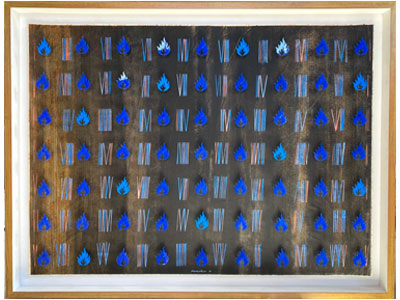 Paper: a field of Revelation